Importing Motorbikes into Canada by Air

Our experience importing motorbikes into Canada by air in 2011 …

After packing the bikes and our send off we had a few days to get ourselves together before flying out for Vancouver on 26 May. Pretty uneventful flight over, partly thanks to the fact that we were on one of the new A380s which had a touch screen entertainment system with all the bells and whistles that kept us more than occupied, and partly due to the lack of sleep that is characteristic of last minute preparations on a trip like this.

Finally arriving in Vancouver in the afternoon of the same day that we left (gotta love crossing the date line) we were a bit buggered but not feeling too bad so once we had convinced the Canadian immigration officers to let us in their fine country we lugged our bags out into the far flung freight warehouses to visit our customs broker to pick up the paperwork for us to try and clear our bikes through customs. Ivan had already called to let us know the bikes were there and waiting for us (we dropped them of to him on Thursday, they were in the air on Friday and they arrived on the next Wednesday), we were going to try to attempt to clear them through customs ourselves with the paperwork he had arranged. 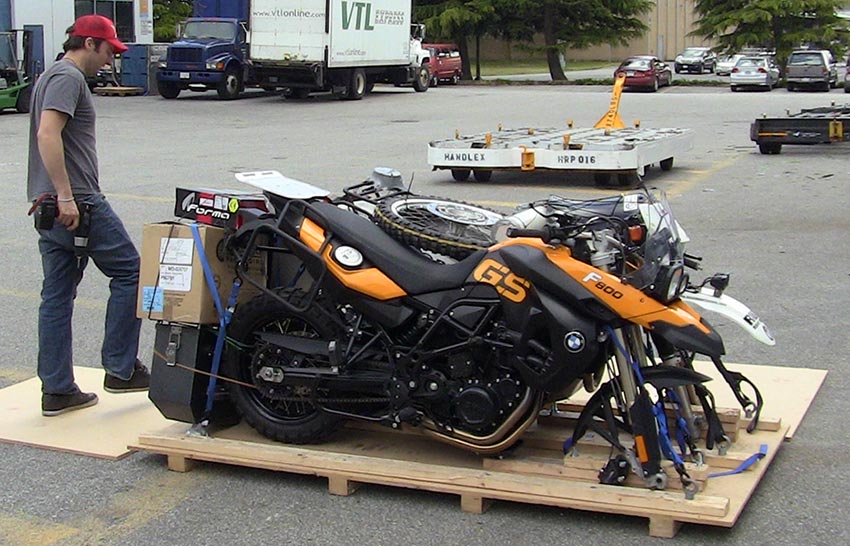 On getting the paperwork from the customs broker (Ivan arranged this and gave us their details to contact them) we just needed to take the forms to the customs office and get them stamped. Honestly, I took longer waiting in line than actually getting the bikes cleared. The guy in front of me was picking up a package for a ‘friend’ that he didn’t know the name of and had no idea what was in the package. I think the customs guy (a young bloke) was relieved to speak to someone who had all their paperwork in order and knew exactly what was in the shipment and what it was going to be used for (talking about the trip probably didn’t hurt… everyone from the immigration guy in the U.S. to this guy seemed to enjoy talking about it). The only thing he asked me about was if the bikes were clean and the condition of the tyres – to which my response was to joke about the stringent quarantine laws for Australia and that tyres, chains and sprockets were all brand new and the bikes thoroughly cleaned.

The final thing that he asked for was to make a signed declaration about what was in the crate. Ready for this I handed him a commercial invoice/statement that Ivan had advised us to prepare and he was especially pleased with that. Download this document here to see what we included [link to commercial invoice]. The other documents that we had on hand but didn’t need were: Registration for both bikes Both our international driver’s licences Story from the local paper about the ride.

Basically all we needed to do was convince the customs officer that the bikes didn’t pose a quarantine threat and that we would be taking them out of the country when we left. This process did not involve any inspection (although they are entitled to and can request to do this) or any fees from the customs service. That sorted we made our way into Vancouver to find a hostel for some much needed sleep. It’d been a long day and the next morning we would need to unpack and re-assemble the bikes.