One of the most amazing off-road adventures in the U.S, the Utah Traverse is less of a route and more a set of guidelines for exploring Southern Utah. The goal: use mainly unpaved roads to see all there is to see of the Grand Staircase-Escalante National Monument and Glen Canyon National Recreation Area, while crossing the entirety of the state. The options are endless, as (unlike national parks) national monuments allow for off-road vehicles as long as they stay on designated trails. With the Utah Traverse, you’ll pass through magnificent red sandstone canyons, while spotting the iconic, towering rock formations that were staples of the spaghetti Western movies of the 1960s. These are the quintessential landscapes of the American Southwest.

Planning Your Trip of the Utah Traverse

The length of the Utah Traverse is however long you wish to stay in the wilderness, but plan for at least a week’s worth of supplies to be safe. One possibility is to start the trip in Beaver Dam State Park, which is just over the border in Nevada. The campground is almost never full, so it’s a good place to gather your supplies, and wits, before setting off into the desert.

One important thing to note is that there are only two ways to cross Lake Powell: by ferry between the towns of Bullfrog and Hall Crossing, or by bridge at the town of Hite. No matter what route you choose, you will need to make your way to one of these spots at some point to get across the lake. 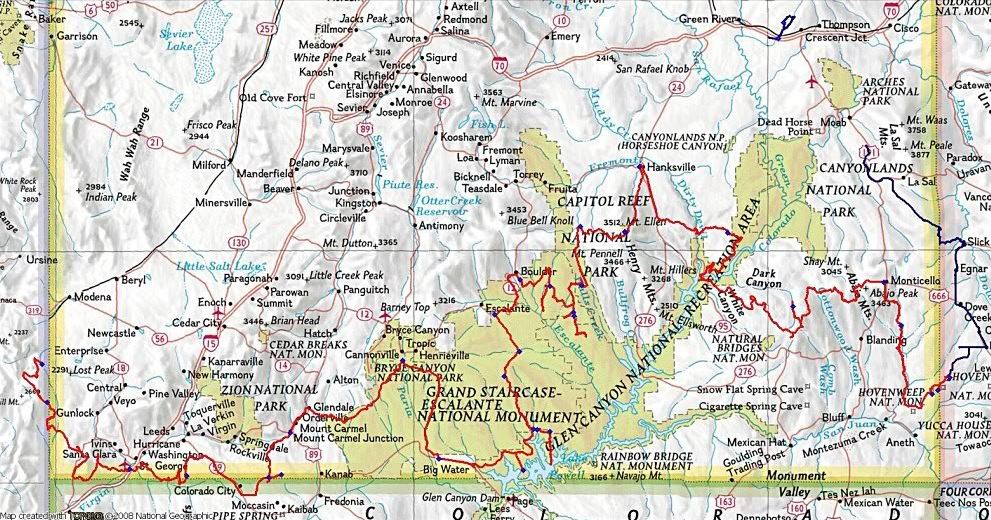 Despite the focus on keeping this an off-road adventure, it’s not that hard to come by fuel on the Utah Traverse. St. George is the first major stop, and has all the amenities you could ask for. From there, the roads along to the tourist hotspots of the national parks and recreation areas will be your best options for finding fuel.

There are also a number of places to find lodging and food on the route. There are five national parks and recreation areas along the way, all of which accommodate thousands of tourists. But the Traverse will be much more enjoyable if you can outfit yourself with a tent and sleeping bag, leaving you free to sleep under the stars just about anywhere. As for food and water, this is the desert, and for safety’s sake you should always have enough water (and food) for a couple of days.

The route passes along the edge of Zion National Park, home of the fifteen-mile-long and half-mile deep Zion Canyon. If you have the equipment to hike in and pitch a tent here, it’s the trek of a lifetime.

Bryce Canyon National Park is also touched by the route, and is the site of the world’s largest collection of hoodoos, otherworldly sandstone pillar formations that look like fingers bursting up through the soil. There are an endless number of hiking opportunities through the park’s canyon lands.

Lake Powell is definitely a highlight of the trip, and is a popular vacation spot for people living in the region. The reservoir is set in a breathtakingly beautiful canyon where there are great swimming opportunities. It’s also the most glaring example of how drought conditions have affected the Colorado River, as the lake’s waterline has dropped 100 feet from where it was in 1980, marked by the white “bathtub ring” of mineral deposits on its red sandstone walls.