Motorcycle touring in Europe takes you from one extreme to another, from the stark, barren beauty of the far North, right down to the bustling coastal towns of Spain and Italy. Dissected by the immense Alps, the continent offers a fantastic selection of roads, and a vast mix of cultures. Ride 100 miles in any direction and you’ll find yourself immersed in a new world altogether. Read more for inspiration and tips for planning a motorcycle trip in Europe, including the top routes and destinations.

Looking for a self-guided motorcycle holiday in Europe? We’re now offering a range of tours as Yellow Yeti Travel.

Got your own bike or would prefer to hire a bike and just get on with it. We’ve developed a range of route pack to take the hassle out of planning your trip and help you get the most out of your time in Europe. Click below to find out more. 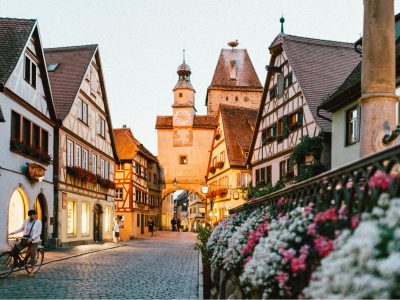 The top routes and destinations for Motorcycle Touring in Europe

One of the most well-known passes in the Alps, and widely considered one of the best roads in the world, its 48 hairpins take you up to an altitude of 2750m. The views over the Alps are fantastic. It can be a busy road during peak times. Find out more >>

The Swiss Alps are famous for skiing, but the roads that wind up and down the mountains are a bikers dream. Notable passes include the Gotthard pass, the Furka pass, the Grimsel pass and Susten pass. Watch out for the unpredictable weather and cobblestones as you enjoy the sights and the ride of a lifetime.

Another classic ride, 50km of twisting and turning, diving and rising as the road hugs the rock face and looks out over the coast. Admire mountains and rocky cliffs on one side and look around to see the dazzling blue sea. Find out more >>

Norway is a fantastic country to ride, and with 18 carefully selected tourists routes to play with, you are sure to see the best sights and take in some of the greatest roads. From the unique Atlantic Ocean road, to the tunnels and curves of Lysevegen, there’s something for everyone.

If you ever wanted to ride a race track, head for Germany and tackle one of the world’s most difficult rides. It’s not free, but the ride is spectacular, and you can be sure that no one will be coming the other way. Open most days during summer, but it’s worth checking in advance.

Cutting across Portugal’s wine region and following the course of the spectacular Douro valley, this road has recently been voted as one of the best in the world. The 27km section between Peso da Régua and Pinhão alone has 93 bends and takes in various views through the valley and the surrounding vineyards.

A beautiful mountain range and national park in the North West of Spain that offers up some fantastic riding experiences. Lush green hills contrast with bare rocky peaks as you twist and turn around roads that snake up and down the range. Find out more >>

Head for France and take on some of the balcony roads, carved out of sheer cliff faces and incorporating several tunnels and hair-raising drops. The anxiety will pay off as you are rewarded with fantastic views. The Combe Laval road and Gorge du Cians are two excellent examples of many.

From North to South and East to West, Europe changes dramatically in terms of geography and natural wonders, keep an eye out for the following:

Road quality is on the whole fairly very good for motorcycle touring in Europe. Highways are generally immaculate tarmac, as are other main roads. Even most mountain passes are well looked after, but some may be potholed and even gravelly. Look out for old cobblestone roads on some of the mountain passes in the Alps. In some areas country roads might suffer from neglect or freeze thaw action, and some roads in Spain, Italy and Greece could be better.

Traffic on major highways can be very heavy during the summer months, and there are often road works on the highways which slow things down considerably. However, with so many great quality smaller roads, unless you are in a rush, it’s worth avoiding the highways. Larger cities and capitals are more often than not fairly congested during rush hours. For the most part the drivers are fairly calm and polite, however certain countries such as Italy are prone to aggressive driving styles.

There is a network of toll roads throughout Europe and it depends on the individual country how these are paid for. Some countries such as Austria use a vignette system, which can be bought at gas stations, whereas others use toll gates. These can be quite expensive, but the road is sure to be of excellent quality and will guarantee you the faster route.

Signs differ from country to country with regards to the colors used for toll roads, highways etc, but the continent is well signed and getting lost is fairly difficult as long as you carry a map/gps.

Europe is one of the easiest places in the world to ride with regards to paperwork. Citizens of Australia, Canada, New Zealand and the States are free to enter Schengen space for 90 days out of 180 without a visa. If you leave Schengen space before 90 days is up, the countdown is held and continues on your return. If after 90 days in Schengen space you leave and spend 90 days in another area, for example the UK, Balkans or Turkey, you are free to return to Schengen space for another 90 days. This process can in theory be repeated indefinitely. With regards to insurance for motorcycle touring in Europe; Green card and EU insurance policies will cover the majority of Western Europe and a Carnet de Passage is not required for any country in Europe.

Check out our blog for articles on our experiences in adventure riding in Europe or read our general Adventure Motorcycle Touring Guide.